How to Make the Most out of your Mentorship: PART 2, Mentoring Resources

Last month we shared some tips to make the most out of your mentorship. If you missed it, read it here. This month, we’ve compiled a list of resources to help with the journey- whether you’ve joined our Women Accelerator’s mentoring group OR just want to strengthen a mentoring relationship you already have in place, these links will help!

In many cases, a mentor’s advice and the mentor/mentee relationship has an impact that lasts long after the official mentorship ends. To preface the resources, we asked the Women Accelerators leadership team to share some of the best advice they’ve ever received. “I try not to sweat over little things that are not that important. The other thing is I stop myself when I start becoming a perfectionist because no one is.”

“If you aren’t LOVING your current role, look around for the resources available to you within the organization – ask the question if you aren’t sure you can take courses. Take as many classes or accept as many opportunities as you can. Learn as much as you possibly can. Continue to work hard in your current role but exploring resources and learning may make you more qualified for your next role or ignite an old passion for your current position. ”

“Sometimes you will just not be a fit – for an organization’s culture or a specific role. That is OK. If you don’t get the job, walk away from a job or lose a job, it doesn’t mean you are a failure. Keep your head up and remember some of the best things in life are found after someone failed. Press on and find a spot that clicks – you’ll be much happier.”

“You’re mad because you suck and you don’t want to suck. You’re used to being the best. But you need to understand you’re going to suck for awhile and that’s OK. [in context of starting a new role and the learning curve that comes with it].”

“I used to get burned out very often. One of the best advice I have gotten is to “not lose sight in the current and always remind yourself of what you want” because work requests can be endless and some of them don’t necessarily lead to anywhere career wise. It is important to remember what excites you the most and follow that.”

Can you think back to advice you’ve received from a mentor that still impacts your life today?

Mentoring can be an incredible opportunity with SO much gained but it can also be SO much work especially if you don’t know where to start or what to ask. Check out the resources below to help guide you as you navigate through a mentorship as a mentor or mentee: Want to learn more about our annual mentoring program? Find out more here.

Finally, remember that we are in this together. Empower, Engage and Elevate! 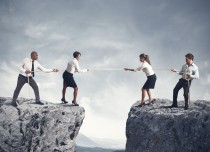 Own Your Own Football: Conflict Communication

Figure out what drives your heart, then own it. And by God, they will let you play. In the evening of Tuesday, September 27th in Cambridge, a group of about thirty women engaged in industry, academia, law, entrepreneurship, and more, gathered around a conference room table. They were there not just to hear Michele Whitham speak about how she came to “own her own football”, but to connect and share ideas about handling conflict in the workplace.

Michele Whitham is a powerhouse of a woman with a list of accolades and accomplishments that easily make her one of the most admirable women I have ever met: she is a lawyer that is heavily involved in social justice, activism, and community engagement, is a 2015-2016 Inductee into the National Association of Professional Women and the Association’s VIP Woman of the Year, was a co-leader to launch the inaugural Women’s Bar Association of Massachusetts’ Women’s Leadership Initiative, and so much more. Even more impressive is that behind her stunning achievements, she is a kind, empathetic, insightful, and strong-willed woman with a story that so many of us can relate to. 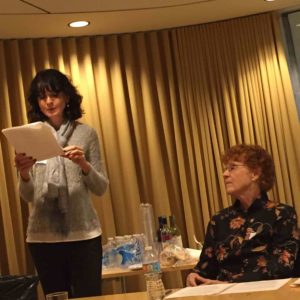 Leaning into the table and talking to us like old friends do, Michele described how she discovered a love for football at five years old. She set her sights on becoming a football player, and would practice throwing the ball around with her father and her neighbor, Al Cowen, a well-known footballer in Texas. She started going to pickup football games, but time and time again she was the only girl, and she would never get picked to play. Undeterred, she continued to return to these games until a few years later, her father came home and surprised her with a gift: an official NFL football, signed by the one and only Cowen. The very next pickup game she went to, she proudly brought her own football, and not only did she get to play, but she got to be the captain.

The message of her childhood story was simple: listen to your heart and what drives you, be 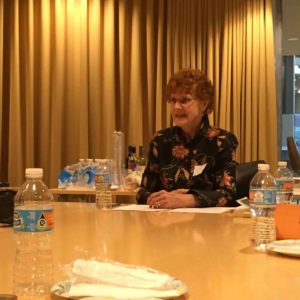 confident in it, bring it to the table, and the people sitting across from you will let you play because you are owning the part of yourself that put you there. That is the first lesson in conflict communication: practice the art of self-empowerment and cultivate your professional presence. Consider what you are aiming to achieve, and decide how you are going to approach a situation. Have confidence in your abilities to do all that you can do, and be committed to listening and learning as much as you can about the motivations and values of other people in the room.

There were six other points highlighted throughout the evening that sum up the most important nuggets of wisdom that Michele presented as the keys to her continued success in dealing with conflict: By the end of the evening, more than half of us in the room had joined in with Michele’s pointers to ask questions, provide thoughtful insight, and share our own positive or negative experiences. Conflict is something that we all have to deal with, and none of us are in this alone. Approaching a conflict with maturity, a willingness to listen to others and a sense of your own self-are three important pieces to successful resolutions. And we must not forget to lean on each other for help when we need to see more sides to the story.

Seeing the Silver Lining in a Conflict

For most people, conflict is uncomfortable at best and downright nerve-racking at worst. I’ve met few people that genuinely like conflict, but since we all have different backgrounds, opinions and experiences, conflict is simply unavoidable from time-to-time. I don’t think it has to be a wholly terrible thing though. I know you may read that and think I’m crazy, but bear with me here for a minute: If we work to change our mindset about disagreements, they can become powerful learning tools.

I think about times that I’ve experienced conflict at work. There’s one instance in particular that really rises to the top for me, and it was a disagreement about how to handle a project for a client. I had one idea, and a colleague had a very different idea: I saw an opportunity to add a new feature into our software product that I felt would increase the value for our customer, whereas my colleague felt that we should not do any development work to the software until the customer had used it as-is and requested changes. The debate about which methodology would work best got a bit heated, and although there were no personal slights, I walked away from the disagreement feeling flustered and upset. I ruminated on this all day, and found that it had really gotten under my skin.

By the time my day had ended and I was at home, the distance from the problem had given me a shift in perspective. I had gotten upset that my colleague had disagreed with me, yet I had also disagreed with him. I considered the reasons why he felt his method worked better (no development time spent on what could potentially be a wild goose chase), and I had to admit that he did put forth some genuinely good insight. But then I also recognized that, as the person that worked with this client almost daily, I already knew what they needed at a bare minimum to finish the project, so it was up to me to put that into small, actionable steps that would both impress the customer and not be overly taxing on our developers. I started to form a new methodology over the course of my evening, and when I went into work the next day, I had resolved to walk into my colleague’s office and tell him I had considered his ideas, and I wanted to propose something new that took the best from both of our opinions. Turns out, he really liked my new proposition.

It obviously takes two to tango in a conflict. Sometimes the other person doesn’t play fair. Sometimes the other person can’t be reasoned with or wants to pull rank. Conflict isn’t always going to have a rosy, picture-perfect outcome. But if we consistently steel ourselves for the worst in a disagreement, we’re setting ourselves up for a painful situation. And oftentimes it can feel really good to be the person that is able to step back and say, “You know what? Your ideas are good, and here’s what I like about them. I also think I can contribute in this way.” Consider a time when you’ve been on the receiving side of someone offering an olive branch like that – it’s a relief, right? And if you’re like me, I can’t help but respect the person that a bit more.

Communication in conflict has as much to do with clearly explaining your position as it does with actively listening and understanding the position of someone else. At the end of the day, we all want to be heard. It helps me to remember that my experiences give me a unique opinion, and they are not the same experiences as someone else. By working together, a middle-ground path can make both people in a conflict feel heard and pave the way forward.

Women Accelerators, formerly de la Femme, is a 501 (c)(3) organization based in Massachusetts. We are passionate about promoting the advancement of women and bridging the gender gap.

Your ticket for the: How to Make the Most out of your Mentorship: PART 2, Mentoring Resources

How to Make the Most out of your Mentorship: PART 2, Mentoring Resources